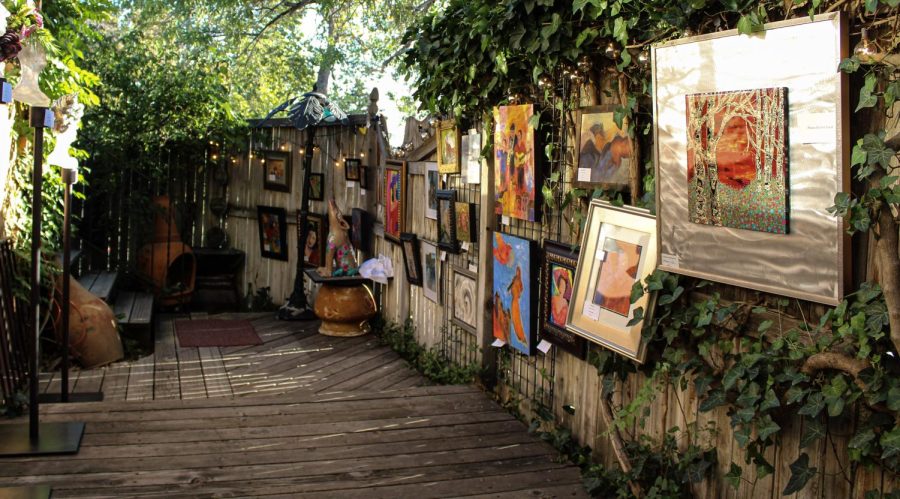 Art is displayed along a fence for the Women in HeART event held at Pilar’s Garden in Salt Lake City, on Saturday, September 25, 2021 (Photo by Brooklyn Critchley | The Daily Utah Chronicle)

Hosted by the Pilar Pobil Foundation in “local treasure,” Pilar Pobil’s garden, the “Women with heART” event was an artistic celebration of heritage and womanhood.

Pilar Pobil is a 94-year-old artist originally from Spain who moved to Salt Lake City, Utah, and the foundation has been made her honor.

As a woman who embraces curiosity as a way of continuously expanding her perspective on art, this philosophy is on display through her own work. And as someone who was born during a time in which art was not a platform of expression for women, it is understandable that Pobil would feel so passionate as to create a platform for fellow female artists to present their work.

Proceeds from this event funded the Pilar Pobil Humanities scholarship at the University of Utah for immigrant women who are looking to pursue a degree within the College of Humanities.

The exhibit took place in Pobil’s backyard. With live music, a food truck and a beautiful garden full of colorful paintings and sculptures, it was undeniable that this would be an unforgettable evening.

The house itself was a cluster of colors, both eclectic and eccentric — even the front door painted a beautiful periwinkle with an orange tree, the work of Pobil — with many portraits hung around the house.

The entrance was filled with pictures and sculptures all lined up against the walkway on the side of the house. The first sculpture to catch my eye was a sculpture series titled “Don’t Touch My Hair” by Inez Garcia. This series provided commentary on “the tension between a subject of desire and a separation of objectivity,” in regards to the act of unwanted touching of hair styles as a microaggression. The sculptures were inspiring, and set the tone for the entirety of the function — poignant and breathtaking.

Walking farther down the walkway, pieces by Stephanie Saint-Thomas caught my eye. The coloration of the pieces were entrancing — I could not look away. Despite the color being so pigmented and glossy she assured me that there was no glass involved, but only wood, a technique she began working with in 1983.

Saint-Thomas is inspired by the trees and the natural artwork that resides within their roots and tree trunks, so it’s only fitting that her canvas reflects that. Her view on the world is so specific and it is absolutely thrilling to see it represented through her artwork.

The biggest takeaway from this event is the importance of holding space for female artists. In speaking with Saint-Thomas, the people who purchased pieces when she was growing up were primarily men, or couples, and now more women are choosing paintings that speak to them as a stamp of independence. This very much speaks to how society as a whole has changed and how these artists grew up in a time where it was expected that women were provided for. So, having both female artists emerge and women collectors is an exciting exchange and partnership that is only broadening with time.

Visual art has the ability to reflect the emotions that stir so deeply within us. The power of an artist to insight their own personal sensation within another is unable to be described with words. This is why artists create, more specifically, this is why artists create from the heart. It is so inspiring to see a strong group of women, with such profound outlooks on the world act as that vessel for other women.