After completing the HYLLA Vintage Hotel’s Alpine Garden in Lijiang, China, Landscape Architecture practice, Z’scape, was invited to design a wild garden and outdoor amphitheater. The low-maintenance and minimally invasive intervention aimed to maximize the restoration of native vegetation on a 3-hectare site, away from the hotel buildings. Named ‘Wilderness Garden,’ the project’s first section celebrates plants growing naturally or at will. ‘Through the changes, we would witness the sprouting of life and observe the withering of it as well. Based on understanding the site’s life cycle, people could appreciate the beauty of four seasons and nature as a living picture where it reproduces, changes, and renews on its own rhythm,‘ shares Z’scape.

Set to the east, the ‘Wilderness Garden’ site was a deserted, low-lying lot of weeds with an uneven surface. It is crossed by two runoffs of melted snow water and populated by large native trees and a few native plants that have grown to adapt to the pan-Himalayan climate of Lijiang. However, as the site had been abandoned for many years, piles of domestic and construction waste were left behind, possibly polluting the passing streams and land. The site sits lower than the Alpine Garden and can be glimpsed from a wooden path nearby. The lush and overgrown plants have unfortunately restricted access to that area for a long time. 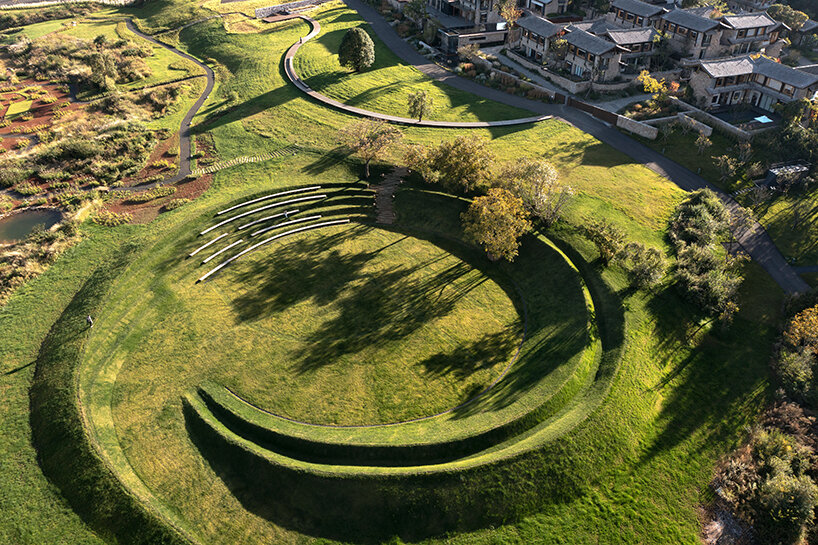 To restore ecological functions, the team at Z’scape first stripped topsoil from the construction area of the wooden path and collected it using protective methods. Then, through a series of procedures — including removing rubble, plastic products, and other construction waste, crushing clay, remixing and filling the topsoil — the land was nourished during months of a long rainy season, waiting for the seeds in the native soil to bud and grow. The vegetation gradually recovered over time and regained its vitality.

Meanwhile, the winding wooden path weaves in and out of the garden, offering visitors a safe and up-close experience of the ‘Wilderness Garden,’ creating an immersive, walkable and reflective space to connect freely with the plants and nature. The path ascends and ends at the elevated observation deck, which provides a distant view of the Jade Dragon Snow Mountain and a close view of the wild garden. It also forms a layered and integrated landscape with the stones and preserved old native trees. 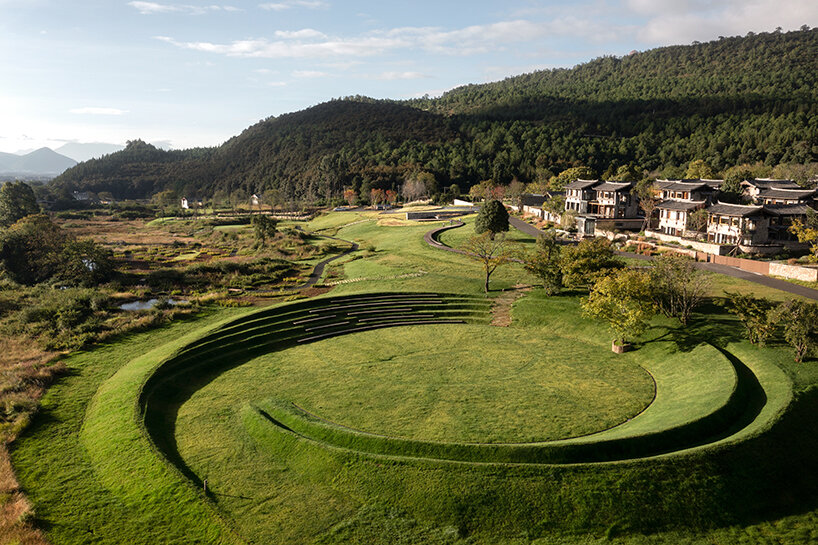 In the middle of the garden is a small piece of experimental land, left without any design intervention to spotlight the color and texture of Yunnan’s unique red soil. Only a few species were replanted in this area, leaving room for natural growth or building small structures. In addition to plants, the ‘Wilderness Garden’ is also an essential habitat for wildlife, providing abundant nutrition and shelter. The wooden path was thus elevated by 60 centimeters, ensuring minimal disturbance to the original site while allowing animals and insects to move around easily. While the stacked stones may appear as a pure aesthetic presence, they provide shelter for small animals.

Two water features were also installed on-site. The first is a circular pond that collects rainwater for irrigation, helps nourish aquatic plants, and attracts wildlife. Meanwhile, a rectangular water feature is hidden among the plants on the eastern border. 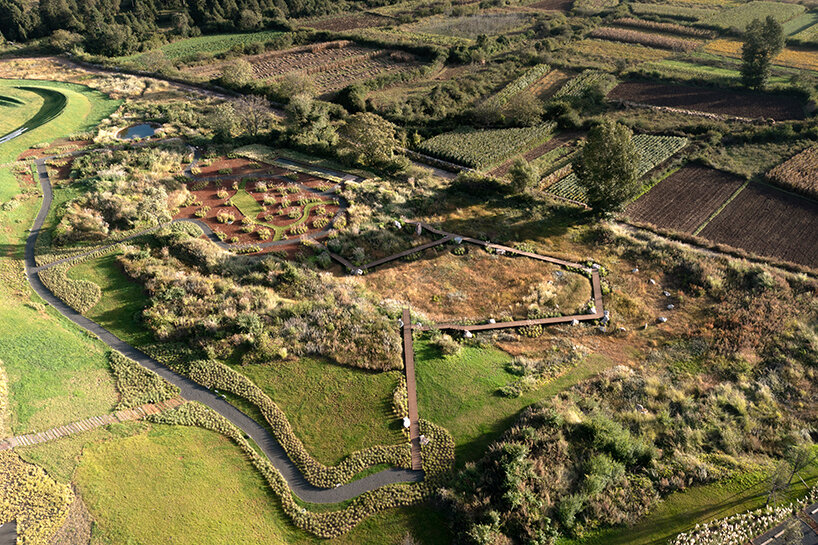 At the northern end of the ‘Wilderness Garden’, a lower and rather open and flat lot sat untouched for years, with a 6-meter drop, inaccessible to people. ‘When we first arrived here, we had an idea that there should be a natural stage which blends with the land, where people can feel the wind and rain, the sun, the moon, the stars, insects and birds. Children can run and play freely, and visitors could quietly look at the snow-capped mountains. The most beautiful songs and dances under the snow mountains can be carried out there, and the most sacred celebrations of the Naxi people can be offered on the stage as well. There would be no need for bright lights or setting, nature is the best stage,’ notes Z’scape.

The 1,500-square meter amphitheater therefore took shape, enclosed by a circular ramp and a terraced platform that can be reached from the wooden footpath, echoing the image of Yunnan’s stepped rice fields through a contemporary design. 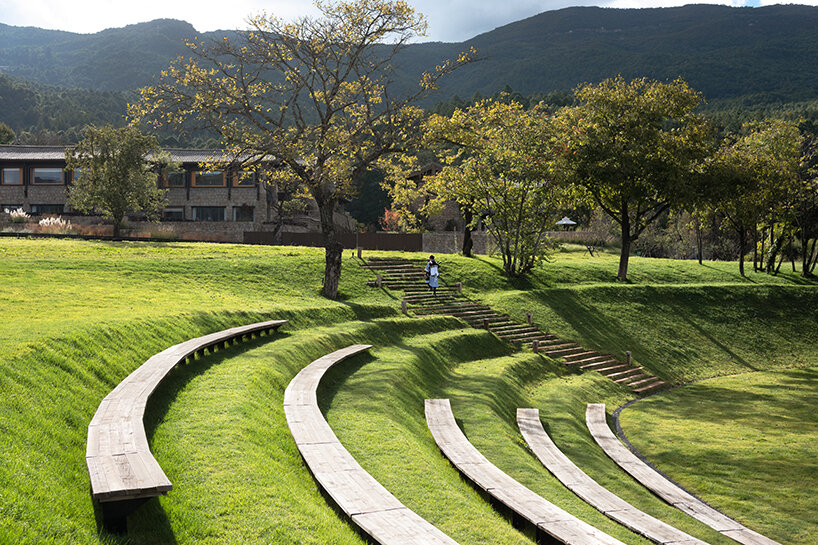 While designing the outdoor stage, the architects slowly raised two ‘ridges’ from the ground, turning them into slopes and terraces. At the same time, a wooden path made of recycled sleepers was embedded in the ground with benches made of old timber. Various landscape elements were later integrated to outline the amphitheater. Gullies, slopes, and platforms also appear in the large circular space, blending in with nature. The traditional Naxi Torch Festival is held here annually, where people pay tribute to the snow mountain and ancient folk traditions and pray for a good harvest. Dances and songs around the bonfire echo throughout the Alpine Garden, becoming a haven for residents and visitors alike.

‘The Wilderness Garden and Amphitheater are an exploration of our landscape design practice. The design technique uses a few simple and light strokes to create a poetic space that blends with the land and environment. The project created an original and artistic space with vitality, establishing a contrast and integration between the wild and disorderly nature and the artificially geometric order. In the overly synthetic modern world, the natural succession of wilderness landscapes brings a touch of hope for green to people. A true wilderness landscape is a habitat for local plants and animals to flourish, then a landscape place for human users to rest and enjoy. In the timeline of the changing seasons, we witness the process of natural restoration and touch the souls of people with the primitive power of the land itself,’ concludes Z’scape.