AP — It’s the premier martial arts group in Europe for right-wing extremists. German authorities have twice banned their signature tournament. But Kampf der Nibelungen, or Battle of the Nibelungs, still thrives on Facebook, where organizers maintain multiple pages, as well as on Instagram and YouTube, which they use to spread their ideology, draw in recruits and make money through ticket sales and branded merchandise.

The Battle of the Nibelungs — a reference to a classic heroic epic much loved by the Nazis — is one of dozens of far-right groups that continue to leverage mainstream social media for profit, despite Facebook’s and other platforms’ repeated pledges to purge themselves of extremism.

All told, there are at least 54 Facebook profiles belonging to 39 entities that the German government and civil society groups have flagged as extremist, according to research shared with The Associated Press by the Counter Extremism Project (CEP), a non-profit policy and advocacy group formed to combat extremism. The groups have nearly 268,000 subscribers and friends on Facebook alone.

Click on the big blue “view shop” button on the Erik & Sons Facebook page and you can buy a T-shirt that says, “My favorite color is white,” for 20 euros ($23). Deutsches Warenhaus offers “Refugees not welcome” stickers for just 2.50 euros ($3) and Aryan Brotherhood tube scarves with skull faces for 5.88 euros ($7).

The Facebook feed of OPOS Records promotes new music and merchandise, including “True Aggression,” “Pride & Dignity,” and “One Family” T-shirts. The brand, which stands for “One People One Struggle,” also links to its online shop from Twitter and Instagram.

The people and organizations in CEP’s dataset are a who’s who of Germany’s far-right music and combat sports scenes. “They are the ones who build the infrastructure where people meet, make money, enjoy music and recruit,” said Alexander Ritzmann, the lead researcher on the project.

“It’s most likely not the guys I’ve highlighted who will commit violent crimes. They’re too smart. They build the narratives and foster the activities of this milieu where violence then appears.” 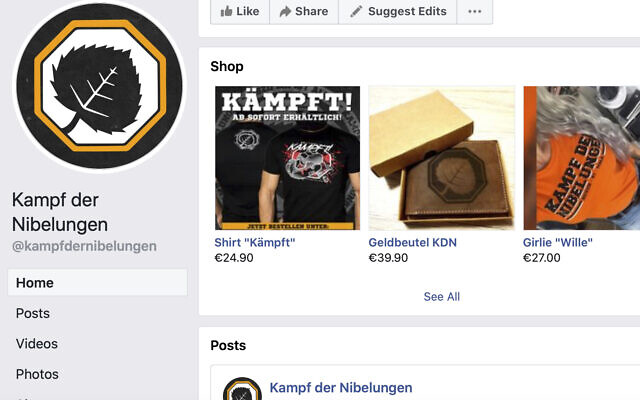 This image captured from the Battle of the Nibelungs Facebook page on September 24, 2021 shows items for sale featuring the right-wing extremist group’s name and logo. (AP Photo)

CEP said that it focused on groups that want to overthrow liberal democratic institutions and norms such as freedom of the press, protection of minorities and universal human dignity, and believe that the white race is under siege and needs to be preserved, with violence if necessary. None have been banned, but almost all have been described in German intelligence reports as extremist, CEP said.

On Facebook, the groups seem harmless. They avoid blatant violations of platform rules, such as using hate speech or posting swastikas, which is generally illegal in Germany.

By carefully toeing the line of propriety, these key architects of Germany’s far-right use the power of mainstream social media to promote festivals, fashion brands, music labels and mixed martial arts tournaments that can generate millions in sales and connect like-minded thinkers from around the world.

But simply cutting off such groups could have unintended, damaging consequences.

“We don’t want to head down a path where we are telling sites they should remove people based on who they are but not what they do on the site,” said David Greene, civil liberties director at the Electronic Frontier Foundation in San Francisco.

Giving platforms wide latitude to sanction organizations deemed undesirable could give repressive governments leverage to eliminate their critics. “That can have really serious human rights concerns,” he said. “The history of content moderation has shown us that it’s almost always to the disadvantage of marginalized and powerless people.” 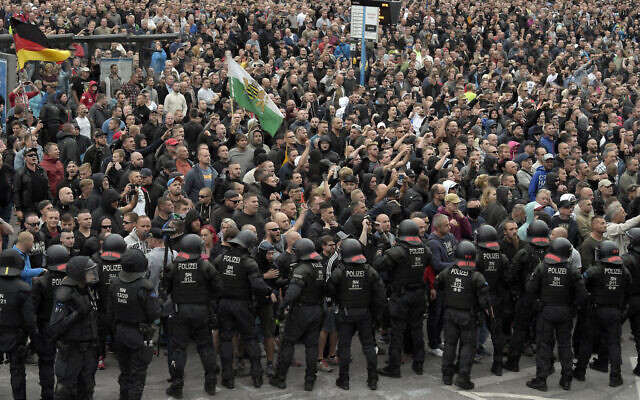 In this August 27, 2018 file photo, demonstrators shout during a far-right protest in Chemnitz, Germany, after a man died and two others were injured in an altercation between several people of ‘various nationalities’ in the eastern German city of Chemnitz the previous day. (AP/Jens Meyer, File)

German authorities banned the Battle of the Nibelungs event in 2019, on the grounds that it was not actually about sports, but instead was grooming fighters with combat skills for political struggle.

In 2020, as the coronavirus raged, organizers planned to stream the event online — using Instagram, among other places, to promote the webcast.

A few weeks before the planned event, however, over a hundred black-clad police in balaclavas broke up a gathering at a motorcycle club in Magdeburg, where fights were being filmed for the broadcast, and hauled off the boxing ring, according to local media reports.

The Battle of the Nibelungs is a “central point of contact” for right-wing extremists, according to German government intelligence reports. The organization has been explicit about its political goals — namely to fight against the “rotting” liberal democratic order — and has drawn adherents from across Europe as well as the United States.

Members of a California white supremacist street fighting club called the Rise Above Movement, and its founder, Robert Rundo, have attended the Nibelungs tournament.

In 2018, at least four Rise Above members were arrested on rioting charges for taking their combat training to the streets at the Unite the Right rally in Charlottesville, Virginia. A number of Battle of Nibelungs alums have landed in prison, including for manslaughter, assault, and attacks on migrants.

National Socialism Today, which describes itself as a “magazine by nationalists for nationalists” has praised Battle of the Nibelungs and other groups for fostering a will to fight and motivating “activists to improve their readiness for combat.”

But there are no references to professionalized, anti-government violence on the group’s social media feeds. Instead, it’s positioned as a health-conscious lifestyle brand, which sells branded tea mugs and shoulder bags. 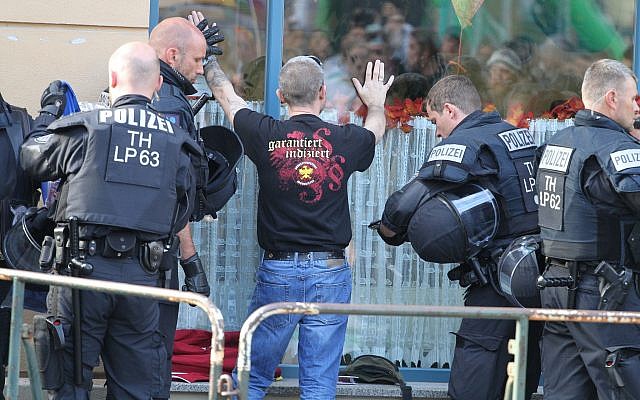 In this photo from October 6, 2018, police officers search a visitor of a far neo-Nazi rock concert in Aploda, Germany. Slogan on the shirt reads ‘guaranteed indexed.’ (Sebastian Haak/dpa via AP)

“Exploring nature. Enjoying home!” gushes one Facebook post above a photo of a musclebound guy on a mountaintop wearing Resistend-branded sportswear, one of the Nibelung tournament’s sponsors. All the men in the photos are pumped and white, and they are portrayed enjoying wholesome activities such as long runs and alpine treks.

Elsewhere on Facebook, Thorsten Heise — who has been convicted of incitement to hatred and called “one of the most prominent German neo-Nazis” by the Office for the Protection of the Constitution in the German state of Thuringia — also maintains multiple pages.

Frank Kraemer, who the German government has described as a “right-wing extremist musician,” uses his Facebook page to direct people to his blog and his Sonnenkreuz online store, which sells white nationalist and coronavirus conspiracy books as well as sports nutrition products and “vaccine rebel” T-shirts for girls.

Battle of the Nibelungs declined to comment. Resistend, Heise, and Kraemer didn’t respond to requests for comment.

Facebook told AP that it employs 350 people whose primary job is to counter terrorism and organized hate, and that it is investigating the pages and accounts flagged in this reporting.

The spokesperson said that the company had removed over 6 million pieces of content tied to organized hate globally between April and June and is working to move even faster. 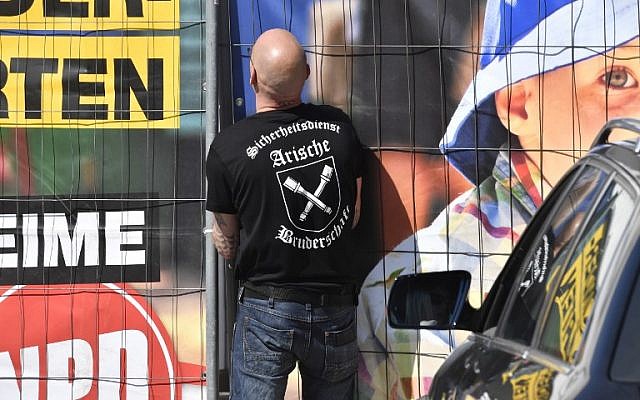 Private security personnel with ‘Aryan Brotherhood’ on his T-shirt opens the gate at the venue of the ‘Schild und Schwert’ (Shield and Sword) neo-Nazi festival, in the small eastern German town of Ostritz, on April 20, 2018. (AFP/John Macdougall)

Google said that it has no interest in giving visibility to hateful content on YouTube and was looking into the accounts identified in this reporting.

The company said that it worked with dozens of experts to update its policies on supremacist content in 2019, resulting in a five-fold spike in the number of channels and videos removed.

Twitter says that it’s committed to ensuring that public conversation is “safe and healthy” on its platform and that it doesn’t tolerate violent extremist groups. “Threatening or promoting violent extremism is against our rules,” a spokesperson told AP, but did not comment on the specific accounts flagged in this reporting.

Robert Claus, who wrote a book on the extreme right martial arts scene, said that the sports brands in CEP’s data set are “all rooted in the militant far-right neo-Nazi scene in Germany and Europe.”

One of the founders of the Battle of the Nibelungs, for example, is part of the violent Hammerskin network and another early supporter, the Russian neo-Nazi Denis Kapustin, also known as Denis Nikitin, has been barred from entering the European Union for ten years, he said.

Banning such groups from Facebook and other major platforms would potentially limit their access to new audiences, but it could also drive them deeper underground, making it more difficult to monitor their activities, he said.

“It’s dangerous because they can recruit people,” he said. “Prohibiting those accounts would interrupt their contact with their audience, but the key figures and their ideology won’t be gone.”

Thorsten Hindrichs, an expert in Germany’s far-right music scene who teaches at the Johannes Gutenberg University of Mainz, said that there’s a danger that the apparently harmless appearance of Germany’s right-wing music heavyweights on Facebook and Twitter, which they mostly use to promote their brands, could help normalize the image of extremists. 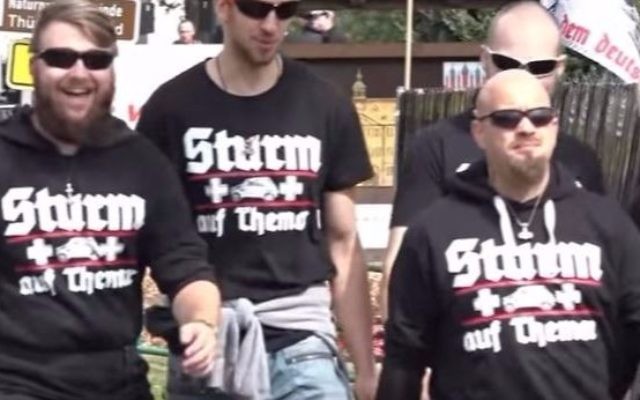 Illustrative: Attendees at the neo-Nazi ‘Rock against Foreign Domination’ festival in Thuringia, Germany, on July 15, 2017. (Screenshot/YouTube)

Extreme right concerts in Germany were drawing around 2 million euros ($2.3 million) a year in revenue before the coronavirus pandemic, he estimated, not counting sales of CDs and branded merchandise.

Hindrichs said that kicking extremist music groups off Facebook is unlikely to hit sales too hard, as there are other platforms they can turn to, like Telegram and Gab, to reach their followers. “Right-wing extremists aren’t stupid. They will always find ways to promote their stuff,” he said.

None of these groups’ activity on mainstream platforms is obviously illegal, though it may violate Facebook guidelines that bar “dangerous individuals and organizations” that advocate or engage in violence online or offline.

Facebook says that it doesn’t allow praise or support of Nazism, white supremacy, white nationalism or white separatism and bars people and groups that adhere to such “hate ideologies.”

But how these evolving rules will be applied remains murky and contested.

“If you do something wrong on the platform, it’s easier for a platform to justify an account suspension than to just throw someone out because of their ideology. That would be more difficult with respect to human rights,” said Daniel Holznagel, a Berlin judge who used to work for the German federal government on hate speech issues and also  contributed to CEP’s report. ”It’s a foundation of our Western society and human rights that our legal regimes do not sanction an idea, an ideology, a thought.”

In the meantime, there’s news from the folks at the Battle of the Nibelungs. “Starting today you can also dress your smallest ones with us,” reads a June post on their Facebook feed.

The new line of kids wear includes a shell-pink T-shirt for girls, priced at 13.90 euros ($16). A child pictured wearing the boy version, in black, already has boxing gloves on.