Like thousands of parents across the country, Kieron Summerhayes struggled to juggle running his business from home while his children were running around the house.

The 43-year-old from west London, who runs an events and exhibition company, was getting frustrated with having to do his paperwork in the kitchen – and clear it all away before dinner time.

So with his business partner Matthew Wozniak, the duo decided to pivot their skills, and launch My Retreat Garden Rooms, offering bespoke garden rooms. 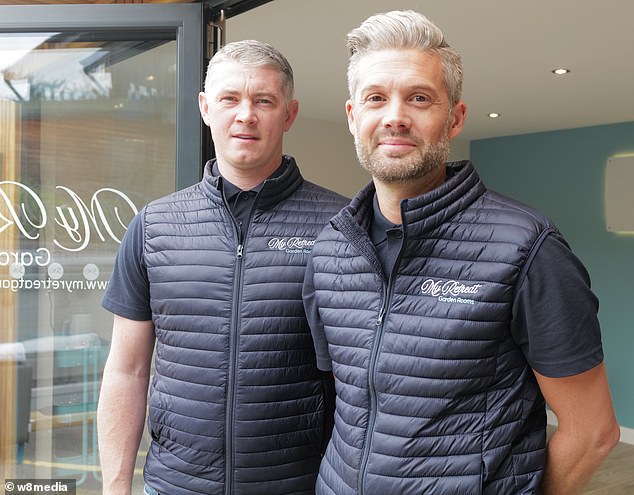 Kieron said: ‘We were sitting trying to do our work with kids running around, like everyone else in the country, realising how impossible it was when the kids finished school at 3.30pm – this is when the schools were open.

‘I said if only I had a garden room – it would be the shortest commute ever, but I could have all my stuff in there, and leave it all out rather than have to tidy it away when the kids get home.

‘We’ve got a great team of builders that we’ve worked with for a number of years that built a lot of features at our exhibitions.

Ad impressions (how many times the ads were viewed): 965,592 in less than a week

‘So I approached them about a garden room business. One of the things we wanted to focus on above everything else was making sure the customer service was right.’

Kieron and Matthew put together a business plan, and came up with three contemporary designs, with prices starting from £22,500.

Their website was launched in November 2020, and by the following month they had their first sale. Fast-forward to today, and they’ve built 24 buildings in their local area.

‘We’re doing brilliantly well. We’re an all-British team. We sit with the customer to understand exactly what they want, because although we offer three models, all our rooms are bespoke, so far every single one has been different.

‘We’ve done everything from garden rooms that are housing swim spas and hot tubs, play rooms and an amazing gym, made out of all different materials.

‘And we built a showroom in Addlestone, Surrey, as we felt it was important to have something for people to come and have a look at.’

It’s with SMEs such as Kieron and Matthew’s in mind that MailOnline has created a brand new advertising platform called Ad Manager to help companies come out of lockdown thriving. 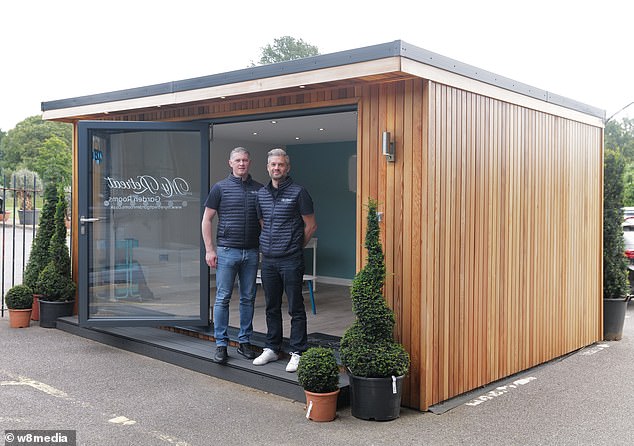 The easy-to-use service puts the control of advertising firmly with the business owner, and means you can advertise your company to MailOnline’s huge audience of 25 million, without a hefty price tag.

As well as being able to target more people in your area than local titles, you can also target customers by postcode, interests and life stage.

What’s more, the campaign is very easy to set up, and can be live within just 24 hours.

Kieron was one of the first business owners to try out the new system, with incredible results including one million advert impressions and nearly 800 clicks to his website, in just one week.

Kieron said: ‘We were looking for brand awareness, and to be able to drive that awareness and advertise on a platform such as MailOnline is incredible.

‘I’ve been really impressed by the number of impressions at just under one million, and we’ve had 760 clicks to the website, and we’ve had around four sales enquiries from it so I’m over the moon.

‘We were very pleased with the results of the campaign. We are a relatively new company and felt that the Mail/Metro would elevate our brand awareness.

‘Ad Manager was easy to use and to keep on track of and we will definitely use the platform again in the future.’

MailOnline’s new Ad Manager advertising platform is ideal for SMEs who want to reach a large, but targeted audience of thousands of potential customers.

The system is easy to use, taking just minutes to set up – and it could be live the following day.

Ad Manager enables small businesses to reach more adults across all UK regions than ever before, with hyper-local advertising for relevant, affluent customers.

Not only can you advertise to more people in your area than your local titles can reach, you can also target customers by postcode, interests and life stage, ensuring you reach as many of our 25 million consumers as you choose.

There are no hidden fees and you can control everything, from budget to target and audience to creative design.

Keiron Summerhayes and Matt Wozniak had worked together for different brands for 20 years before deciding to start their own business together.

They both left their careers in March 2020 to start an events and exhibition company called The Event Lab – just as the pandemic hit.

Fortunately, they still had clients they were working with, and financially things were ‘ticking over’ but they knew it would be a good time to pivot their skills. So they launched My Retreat Garden Rooms, offering bespoke designs.

‘I’d left my job in advertising in March 2020 to set up an events company with Matt, when the pandemic really kicked off. So it was spectacular timing!

‘I’ve always done sales and marketing and he’s always done the delivery side of it, that’s why the partnership works so well.

‘We were lucky as we still had clients we were working with but the events couldn’t happen.

‘We were OK financially and we were still doing a lot of planning work with other companies, so we were ticking over.

‘But while we had the headspace that lockdown afforded us, we wanted to know how we could pivot the business. No one knew how long it was going to go on for, they said events were going to be coming back from January 2021, but we were planning for what if it doesn’t.

‘You never know what is around the corner. So we thought having two businesses that are very similar, as all the skills we have as a team were fully transferable to the garden room business, would be a pivot that worked quite well.’

Although the idea of working on a similar project had been mooted before, Kieron says it was given ‘serious thought’ when faced with the reality of working from home with three children. 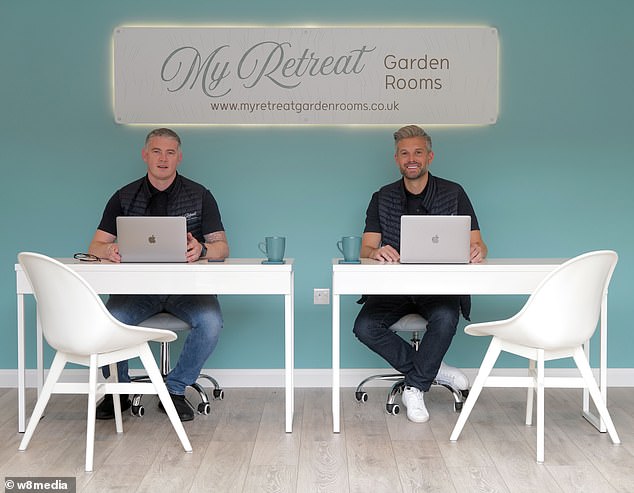 ‘We looked at what type of business we wanted to be, and put a business plan in place about where we wanted to be in three years time, and worked backwards from that,’ Kieron said.

‘We were very specific about picking a local area, not taking over the world as we’re a relatively small team, so we didn’t want to be travelling all over the country just yet.

‘And we didn’t want to be all things to all people, and our prices reflect that.

‘We’re really pleased with how well it’s done – we’re now getting more unusual requests, such as high roofs, trapezium shaped rooms, and ones that are sunk into the ground, so it’s definitely keeping us all interested!’