Priti Patel’s ‘hypocrisy’ on Afghan judges: Lawyer accuses Home Secretary of failing to save women from the Taliban after troops withdrawal

By By David Barrett Home Affairs Correspondent For The Daily Mail

Priti Patel has been accused of ‘hypocrisy’ after failing to grant urgent visas to 30 Afghan judges whose lives are at risk from the Taliban regime.

British lawyers who are representing the judicial figures – most of whom are women – say although the Home Secretary pledged to prioritise the evacuation of vulnerable Afghans, her words have not been backed up by actions.

A slew of legal cases will be lodged from today urging British courts to overturn a decision not to allow the ‘desperate’ Afghan judges to come to the UK. 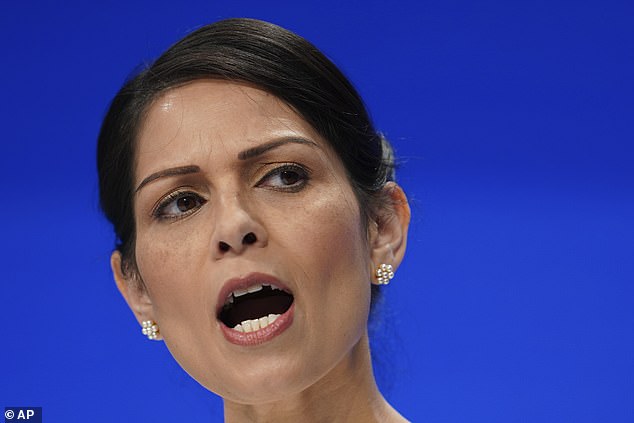 Solicitor Maria Patsalos, from top law firm Mishcon de Reya, said: ‘We’re in daily contact with the judges and their messages are getting more and more frantic.

‘The Government’s response has completely fallen short of what Priti Patel promised and what she said would be the case. I think the Home Secretary has been hypocritical.’

The judges’ cases were first raised with the Government on September 9.

It comes as the UK government yesterday confirmed dozens of female Afghan footballers can be resettled in the UK.

The 35-member development squad of 13 to 19-year-olds have spent weeks in a hotel in Pakistan after they fled Kabul in September.

But many of the judges in Afghanistan are being tracked and ‘actively hunted’ by Taliban and Isis extremists they personally had sent to jail, the UK lawyers have said.

They have been offered seats on an evacuation plane to Qatar but need visas to show they can continue on to another country.

‘We have put in a test case which we believe to be our strongest case, for a judge who has the strongest connections to the UK,’ said Miss Patsalos, who is representing the judges for free.

‘Should we not hear back or if they request more time, we will be proceeding on Monday for permission to issue a judicial review.

‘We’ve got lots of evidence and information as to the imminent threat that they face due to the Taliban.

‘We will be bombarding the government lawyers and being a nuisance, because, quite frankly, they’re being a nuisance themselves through their delay and also by giving no indication whatsoever that they’re willing to help. 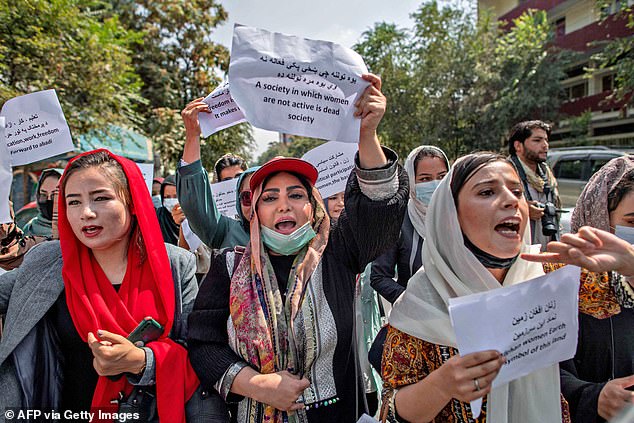 Afghan women hold placards during a demonstration demanding better rights for women in front of the former Ministry of Women Affairs in Kabul on September 19, 2021

‘The problem is that they have washed their hands of the situation, seemingly.’

The UK Government has rejected visa applications under the Afghan Relocations and Assistance Programme – designed for interpreters and others who worked for British agencies – because the judiciary do not meet the strict criteria as direct UK employees.

It has also refused to consider applications under the new Afghan Citizens Relocation Scheme – intended to take up to 5,000 people a year – because it has not yet been formally opened, despite being announced by the Home Secretary in August.

A further separate application has been rejected because applications have to be made in person at a visa application centre – which the judges are unable to do.

A legal source close to the case said: ‘It’s incomprehensible why the UK Government won’t issue these visas, given the immense risks being faced by the judges.