Like many people in the UK and around the world, Rupert Murdoch has been watching more television than usual. Like some viewers, he has been unhappy with the channels on offer. Unlike almost anyone else, however, the media mogul could do more than just complain about it.

From the Oxfordshire estate where the nonagenarian has sat out much of the pandemic with his former supermodel wife Jerry Hall, Murdoch resolved to launch his own station, said people familiar with his thinking.

The executive chair of News Corp and co-chairman of Fox Corporation had been toying with the idea of launching a UK news channel for at least two years, but this summer — especially after he saw the troubled launch of GB News — he became more insistent that the project go ahead.

This week, three days after former Murdoch acolyte Andrew Neil stepped down as chair and presenter of GB News, and in the middle of a twice yearly gathering of the British television industry elite in Cambridge, News UK went public with its plan.

The station, talkTV, is to be made widely available on regular television platforms such as Freeview, Virgin Media and Sky, as well as online, from early next year. 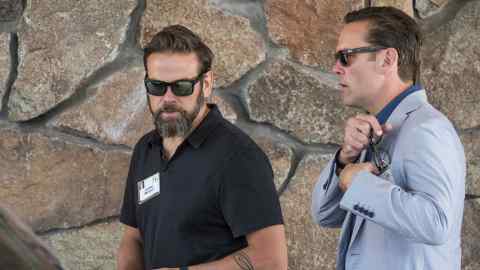 Murdoch has already wooed one of the biggest names in broadcasting. Piers Morgan, who quit ITV’s Good Morning Britain after a row over remarks he made about Meghan Markle, is joining the station in a “global deal” in which he will also appear on other News Corp and Fox platforms.

Whether Murdoch can make a success of the new station — financially or otherwise — soon replaced the BBC’s funding model and the privatisation of Channel 4 as talk of the Royal Television Society convention in Cambridge.

“The jury is out on whether the UK wants an opinion-led news service, and whether they’re going to watch it in enough numbers that they can make a return,” said Sean McGuire, managing director of media advisory Oliver & Ohlbaum Associates, who was head of strategy at BBC News when the corporation launched News 24 in the 1990s.

A return to British television has nonetheless been on Murdoch’s mind for some time. He has been out of the sector since the sale three years ago of Sky, which he set up in 1989, to US media group Comcast. Murdoch had failed years earlier in a bid to take full control of the satellite broadcaster amid outrage over the tabloid phone hacking scandal, and a second attempt became mired in regulatory difficulties.

He was initially interested in bankrolling GB News, but ultimately he was persuaded that a venture from within his own company would be the better strategy. David Rhodes, an American media executive, was hired in 2019 to work on plans for a rolling news channel.

Some top Murdoch managers were unconvinced. Rebekah Brooks, head of the UK subsidiary, was sceptical about the large investment required — not least given the pressures on the TV advertising market. Ofcom impartiality rules were a further complication.

A range of options were drawn up, including potentially buying or partnering with an existing terrestrial channel, but the project languished and Brooks announced the departure of Rhodes in April. Instead, the company worked on lower-key plans for online streaming.

Murdoch, however, remained keen on a TV station, and made the case repeatedly this summer. Around the same time, he was negotiating with Morgan, a former Murdoch tabloid editor who had stayed in touch with his old boss. The pair had dined together with actor Joan Collins in Los Angeles shortly before the pandemic.

News Corp had been talking to Morgan long before he stormed off ITV, but could not agree terms. Some within the company were reluctant to bring him back.

A confluence of interests, including Murdoch’s desire for a channel, tipped the balance. Morgan will present a show on talkTV as part of an arrangement with Murdoch, under which HarperCollins will publish his next book.

Although Murdoch is fulfilling his wish of returning to the small screen, talkTV will be rather different to the more ambitious vision that Brooks originally had reservations about. While the station will carry hourly news bulletins, it will not be a rolling news service, which requires considerable investment: the BBC spends almost £60m per year on its News Channel.

Details of the new station have yet to be finalised, but it is expected to build on a push that News UK’s talkRADIO station has been making into video. The station has 275,000 subscribers on YouTube.

Now branded talkRADIO TV, the offering has evolved beyond studio webcams. Guests appear on a split screen with the host, using video conferencing.

News UK said that as well as news and debate, talkTV would feature sport, entertainment and lifestyle programming. One driving force behind the project is executive producer Winnie Dunbar Nelson, who worked with Morgan at CNN and Good Morning Britain.

Other Murdoch outlets have been experimenting with different formats: The Sun has aired online discussions about the dating show Love Island, Times Radio has conducted internal trials of visual spin-offs of its podcasts and talkSPORT has examined video profiles of sports stars.

For talent, the channel will draw upon other parts of the Murdoch empire including talkRADIO, whose presenters include Julia Hartley-Brewer and Jeremy Kyle.

If it is to succeed editorially, said Lis Howell, professor emeritus of journalism at City University of London and former managing editor of Sky News, talkTV should take care to avoid being too reliant on Morgan.

“Building a channel around one presenter is dangerous. The trouble is that however good that presenter is, they’re not on 24/7. There’s got to be a supporting cast that’s strong enough.”

Murdoch will also be eager to avoid the poor production quality that marred the launch of GB News.

In spite of Neil’s departure, supporters say GB News has a “promising future”. In a meeting shortly after News UK unveiled its plans for talkTV, GB News investor Sir Paul Marshall told the channel’s staff that its financial backers were ready to deploy more funds in the station, which could be used for marketing and other hires.

News UK has not disclosed the scale of its investment in talkTV, although Brooks has promised “high-quality shows at low cost”.

For all the dissection of the commercial and political calculus behind the venture, however, for Murdoch it seems the rationale was more straightforward. “He just loves doing this stuff,” Howell said.

And, as one associate put it, the billionaire simply “wanted something to watch”.