A mother has revealed how she was able to give her daughter her dream bedroom – and saved money by doing the work herself.

Anna Oliver, 36, who lives in Liverpool with her daughters aged seven and three, explained that she turned to Instagram for inspiration after her eldest asked for a garden themed bedroom.

She said doing the decorating herself and picking up a number of cheap items from budget stores including B&M, eBay and ASDA, helped her to transform the previously dull space for just under £2,000, which she estimates is £600 cheaper than if she had asked professionals for help.

The mother-of-two told LatestDeals.co.uk about the inspiration behind the DIY project, saying: ‘My daughter asked for a garden themed bedroom so that started the ideas swirling in my brain. 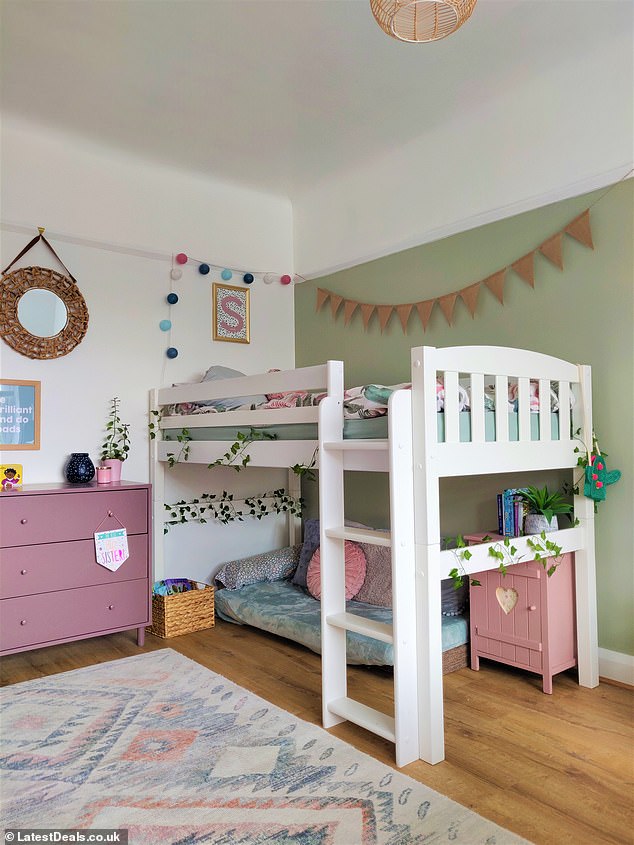 Anna Oliver, 36, who lives in Liverpool, has transformed her daughter’s bedroom into a garden-theme space, pictured, complete with bunkbeds and a pink and green colour scheme 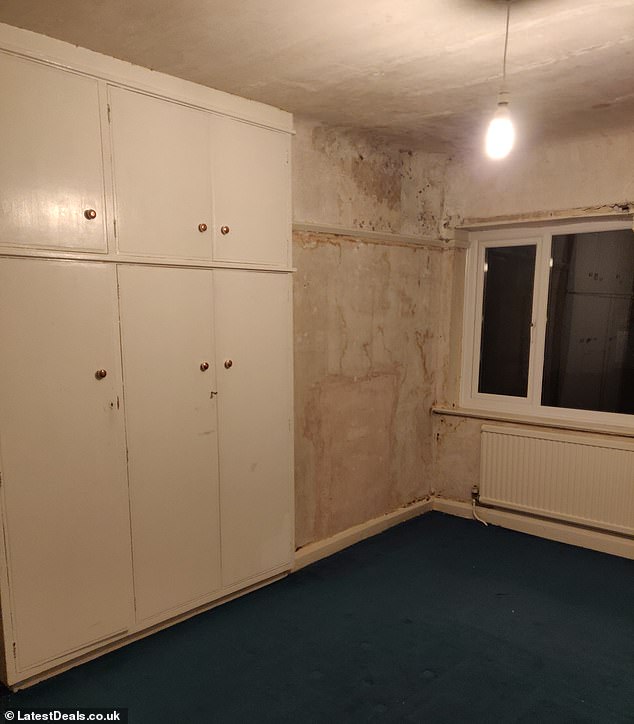 Before the room was dark and dank and needed the flooring and windows replaced, pictured. Anna also stripped back the walls and re-plastered them so she had a fresh base

‘Instagram helped to confirm in my mind that I wanted a pink and green colour scheme. Although my daughters are only young, I wanted the room to feel a bit more grown up but still delicate and feminine.’

Anna began the overhaul by scouting for bargain supplies, then got started by giving the wardrobe a makeover.

She said: ‘I painted it using Frenchic paint in the shade Dusky Blush, which cost £15.95. I also replaced the handles with new ones from eBay for £7.’

Anna also found the perfect rug on the online marketplace for £59.99.

‘I got the bed covers from ASDA for £10 each, and the circular pink cushion and basket are from B&M. While I was there, I also got all the frames for under £5 each.

‘The artwork is from Burnt Peach, Geri loves EMI and eBay,’ she continued.

One of the key features in the room is the ivy garlands draped along the tops of the walls.

Anna said: ‘I’m asked a lot about those I bought a pack of faux ivy garlands on Amazon for £12 and stuck them to the wall and ceiling using white tac.’ 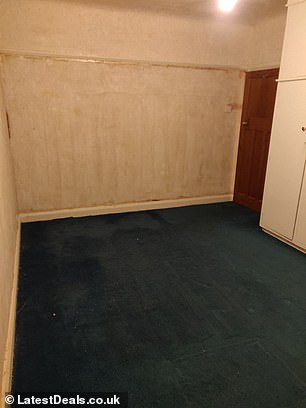 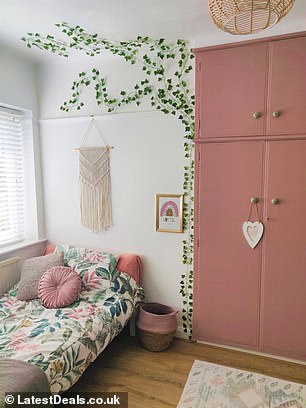 Anna estimates she saved £600 by doing the work herself, including painting the walls (pictured before, left) and the wardrobes. Right, the bedroom with pink wardrobes after

Before the room could be decorated, it needed to be stripped back.

‘We replaced the old rotten window for £390 and got a plasterer in to skim all the walls and the ceiling for £340. We also had a new laminate floor fitted, which cost £450 including the fit.

‘I invested in furniture that would last, so I paid £500 for the beds and mattresses, and £100 for the chest of drawers. We painted the ceiling white and one wall in a colour match of Mizzle by Farrow and Ball which was £25, saving £20.

‘We avoided professional expenses where possible. For example, we stripped the walls of wallpaper ourselves, and by not getting a painter decorator in we probably saved ourselves around £600.’ 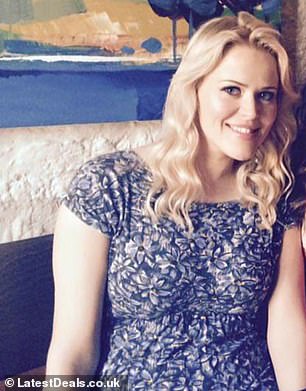 Anna (pictured) said the transformation was delayed because they had a leak from the chimney, which stained the ceiling

Anna revealed the overhaul wasn’t easy, saying: ‘We had a leak from the chimney which resulted in the ceiling staining and needing to dry out over the wintertime before we could paint it.

‘When inspecting the leak in the loft space the ceiling got damaged and had to be repaired and replastered so that pushed things back too.’

Happy with the finished results, she added: ‘There’s nothing I would change, which is actually a surprise as I’m a perfectionist!

‘We had a plasterer in who was brilliant but the rest of the work we knew we could do ourselves and save money in the process.’

Tom Church who is Co-Founder of LatestDeals.co.uk, admitted he’s impressed by the results of Anna’s DIY project.

Tom said: ‘Anna has done a great job saving money on this impressive bedroom transformation. By doing the painting and decorating herself, she has undoubtedly saved hundreds of pounds.

‘By taking some extra time to work on jobs she felt confident to do herself, Anna has managed to use the money she would have spent on professional costs to purchase some durable, long-lasting furniture for her daughters. Nice one!’