Millions of homeowners have converted their front garden into a driveway amid a shortage of guaranteed parking spaces, it has been revealed.

New research by Direct Line Home Insurance claimed that 6.6 million people have turned either some, or all, of the green space at the front of their property into a dedicated parking area.

The insurer suggested that an extra 3.5 million people are currently planning to do the same, while 4.8 million are considering the move in the future.

It based its research on extrapolating the results of a survey of 2,000 adults, carried out between May 28 and the beginning of June this year. 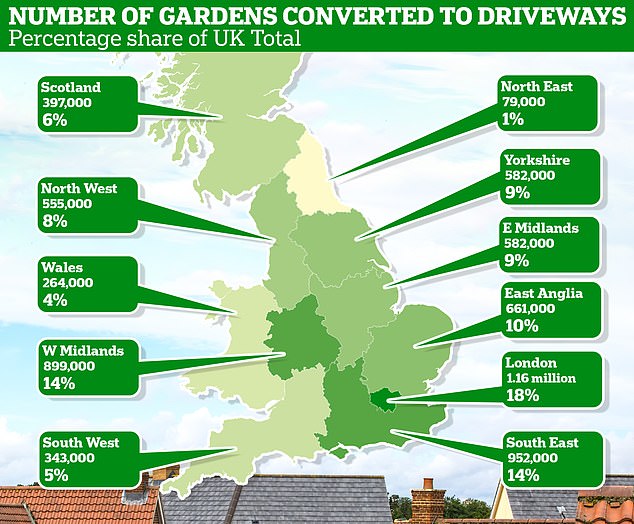 The highest number of driveways installed was in London, according to research by Direct Line

It comes amid an acute shortage of available parking in many towns and cities where even residents parking fails to solve the issue.

The solution of converting a front garden into a driveway can typically cost thousands of pounds, according to the research.

It suggested that the average cost of having a driveway installed is £2,475. Direct Line said that this equates to £16.3billion already spent by those who have made the changes to their front gardens.

It claimed that a further £10.7billion is expected to be spent in the coming years as the 3.5 million people currently planning on installing a driveway on their property have the work carried out.

It means that homeowners will have spent a total of £27billion turning their front gardens into driveways. 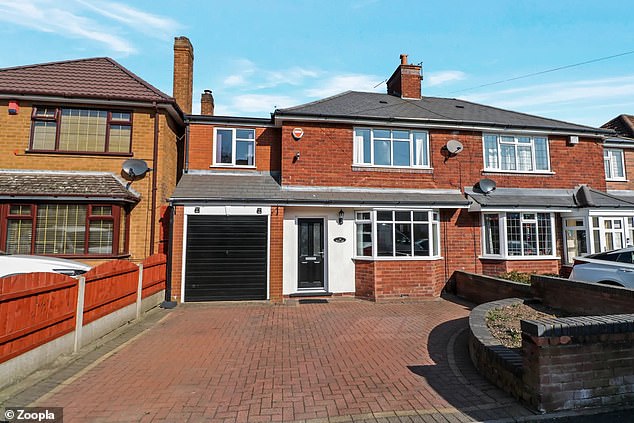 The typical cost of having a driveway installed is £2,475, but it all depends on what type of finish you choose

How much homeowners spend on their driveway will depend largely on the type they choose.

For example, a gravel driveway is the cheapest option, costing those who install one roughly £40 per sq m.

However, for those who want to install a brick driveway it will cost more than double that amount at around £105 per sq m.

The cost of using paving slabs or concrete is cheaper at £90 per sq m and around £70 per sq m, respectively.

There may be environmentally-friendly options that are cheaper still, such as only using gravel or concrete on the areas under the types, and keeping grass elsewhere.

The research found that the main reason people have or want to turn their garden into a driveway is to make parking easier at 38 per cent.

Those turning their front gardens into parking spaces who do not yet havea  crossover need to apply for a dropped kerb, so that they can drive easily into the area.

Separate research carried out earlier this year for Direct Line found that during the past three years there has been a rise in the number of dropped kerb requests received by local councils.

It appears that this has resulted in many taking matters into their own hands as during the past three years there have been more than 7,500 investigations into illegally-installed driveways – at 4,274 – and dropped kerbs – at 3,347 -, working out at nearly eight per day across Britain.

Dan Simson, of Direct Line Home Insurance, said: ‘Parking spaces across many parts of Britain are in high demand. It is interesting to see how kerb appeal now means a dropped kerb, rather than an attractive front garden, with parking valued much more highly than grass and shrubbery.

‘Creating a driveway often means a dropped kerb which involves applying for planning permission from a local council. We would encourage anyone thinking about doing this to do their research to ensure they have all the correct permissions in place. It is also important to keep your insurer in the loop to make sure your policy remains valid and you are adequately covered.’ 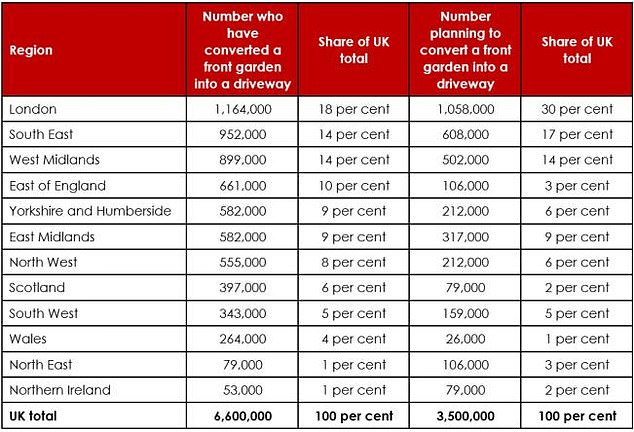 At a regional level, Direct Line’s most recent research found that the highest number of driveways installed was in London, with nearly 1.2 million people having replaced some or all of their front garden.

It accounts for nearly a fifth of all conversions, at 18 per cent, and is followed by the South East and the West Midlands both at 14 per cent.

A third of the population lives in these three regions, highlighted the demand for accessible parking in densely-populated areas.

Demand for driveways in these areas shows no signs of abating with these three regions also accounting for 62 per cent of all those currently planning to convert their front garden into a driveway.

For dropped curb applications, Scotland has the highest application approval rate at 98 per cent followed by the East Midlands at 91 per cent and London at 90 per cent.

The regions with the highest proportion of investigations into illegally installed driveways were Yorkshire at 26 per cent, the East Midlands at 12 per cent and London at 10 per cent.