It almost sounded as if Gary Gray was apologizing for the cabbage.

“It just makes one head,” he told a handful of visitors who had gathered around him. “It’s just the one plant with the one head of cabbage.”

“Hmm,” one woman uttered, taking it all in.

Gray was giving tours at the Master Gardeners demonstration garden this week, as the summer crops were being finished up in preparation for the planting of a fall garden.

Gray, a master gardener who oversees the garden at Sixth Avenue and Idaho Street, across from the Cooperative Extension Service building, was enjoying a mild-weather morning as he took three waves of visitors through the two-acre plot.

After talking about the cabbage that would be coming up soon, Gray led the group over to the herb garden, some grown for fragrance, some for use in the kitchen and some just for bees to enjoy.

The soil is black and fertile and drains well — perfect for the work at hand.

“You could throw in a nail and grow steel out here,” said Susan Buckner, one of the volunteers. “We would love to tell you it’s because we are so gifted, but it’s really the dirt.”

“Yes, we do know what to do with good dirt,” Buckner said.

The garden is staffed by about 50 volunteers, all of whom are master gardeners. During the hottest parts of the summer, they come early and set about taking care of their specific areas. One woman who is limited in what she can do cares for the okra to make sure what is harvested is still good and hasn’t turned woody.

The plot is diverse. The biggest swath is where crops are rowed up, but there are also raised beds, made out of narrow wood containers, elevated a few feet off the ground to make caring for what’s in them a little easier on the back.

And along the sides and back are flowers and other plantings that are there just for the joy of their existence. In the butterfly garden, a monarch posed on a butterfly bush.

A few feet away, there was a buckeye tree, getting close to distributing its good luck charms on the ground.

Down the way is a greenhouse that the volunteers built. And behind that was a row of giant sweet potatoes being dug. On this particular morning, volunteer Roger Area and Kevin Harris, the urban stormwater agent with the Cooperative Extension Service, were helping each other pick up basketfuls of the potatoes and move them inside the greenhouse for safekeeping.

Even with all of the attention from so many hands, the effort is still hard work.

Because the ground is so rich, weeds love it, too, and a lot of attention is paid to keeping them at bay. There are also moles, which require constant attention, and there are even big gophers that live underground.

“At least they keep the dirt tilled up,” Buckner said of the gophers as she stood near a hole, holding her hands several inches apart to estimate the size of their heads. “And, really, you can’t do anything about them.”

Gray said those who work at the garden can take home a few vegetables for their personal use.

“That’s your reward for coming out here and working,” he said.

But the majority of what is raised — many hundreds of pounds of produce — goes to Neighbor to Neighbor and the Salvation Army, he said, adding that every Tuesday and Thursday, food is delivered to those agencies. “Peas, squash, sweet potatoes … the main purpose is to help with the hungry,” Gray said.

Up toward the entrance to the garden is a covered pavilion. More volunteers were there and at the ready with gift bags in case more visitors arrived. Brenda Tillman, who used a cane to get around, gently pruned some of the dead out of an area devoted to flowers. She is retired, having worked for the Department of Human Services, and before that, as a teacher.

“I’m brand new,” she said when asked how long she had been volunteering. “This is my first year.”

“That’s it,” Tillman said. “I’m having a wonderful time.” 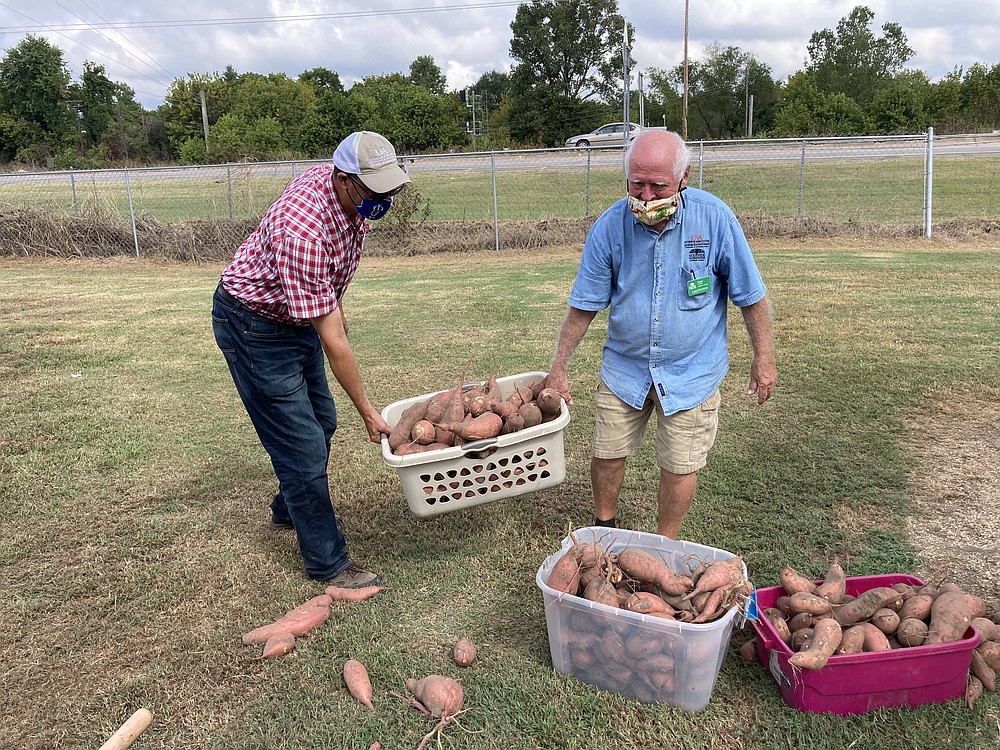 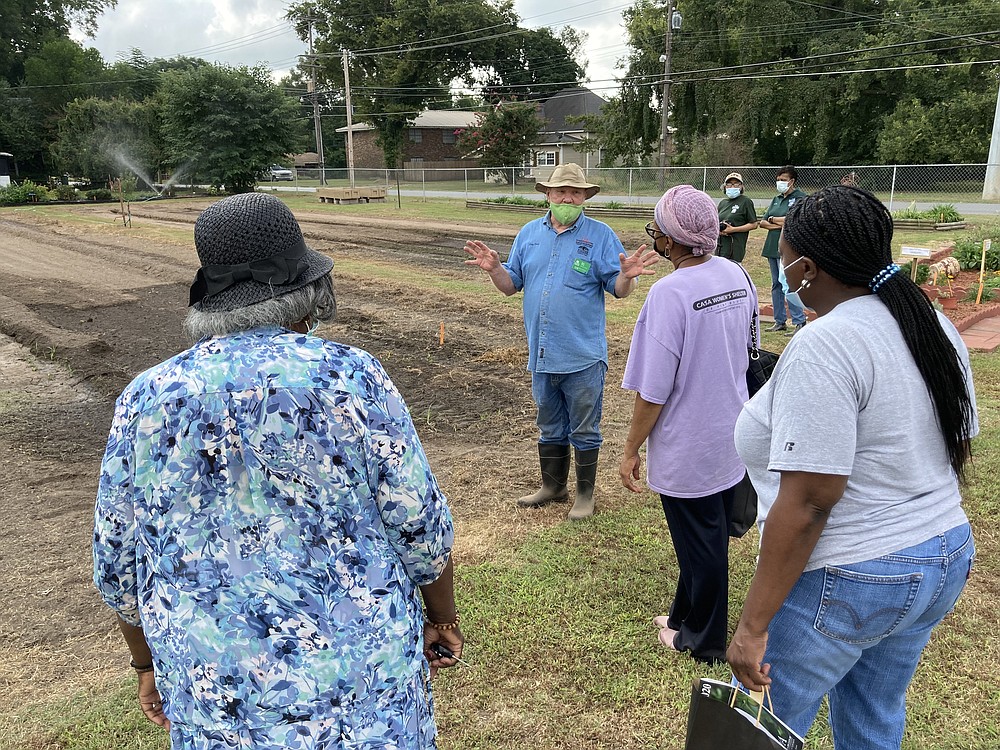 Gary Gray, who oversees the Cooperative Extension Service demonstration garden, talks to visitors about what has been planted in the garden this summer and what is about to be planted for the fall. (Pine Bluff Commercial/Byron Tate)