Today was going to be a humungous day for the city of Penticton. It was supposed to be the day of Ironman. 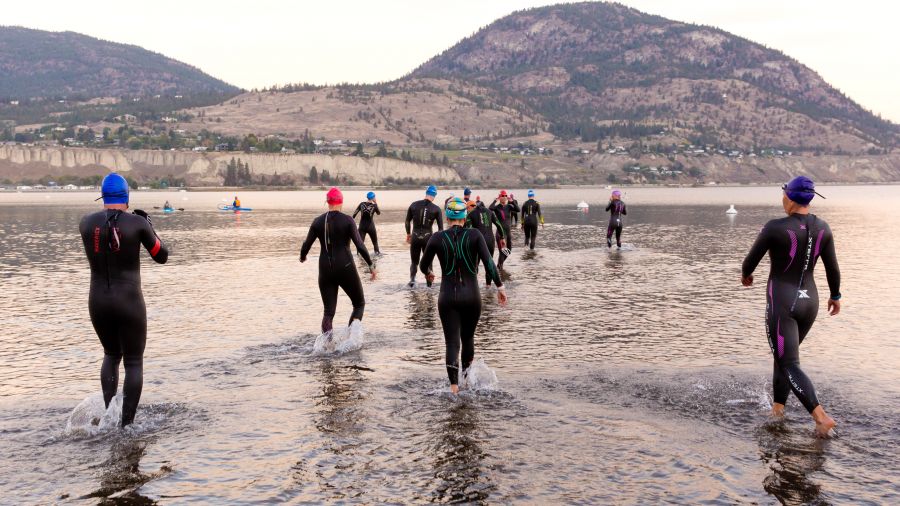 Pandemically postponed from 2020 to 2021, then from August to September, Ironman Canada was all set to make its triumphant Penticton comeback right now. It would fill the roads with top-notch athletes, fill the hotels and restaurants with families and fans, and rekindle the buzz Penticton had before it somehow lost the event a decade ago. 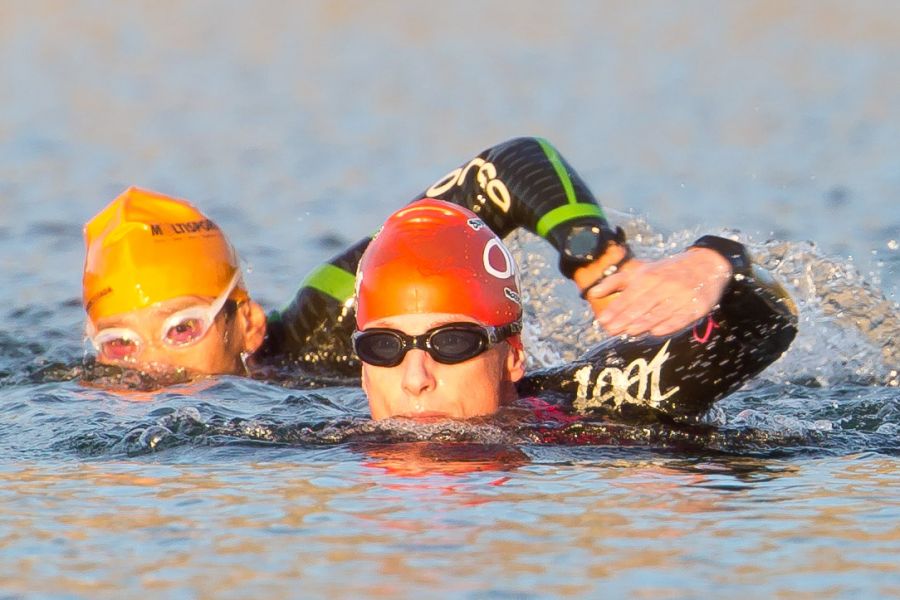 And then at the end of August, even that was stripped away from us. Thanks again, COVID.

But that doesn’t mean the last weekend of September would be completely without an Ironman-distance triathlon. Apparently, some athletes couldn’t let the summer of 2021 go without testing their abilities the way only an Ironman can. 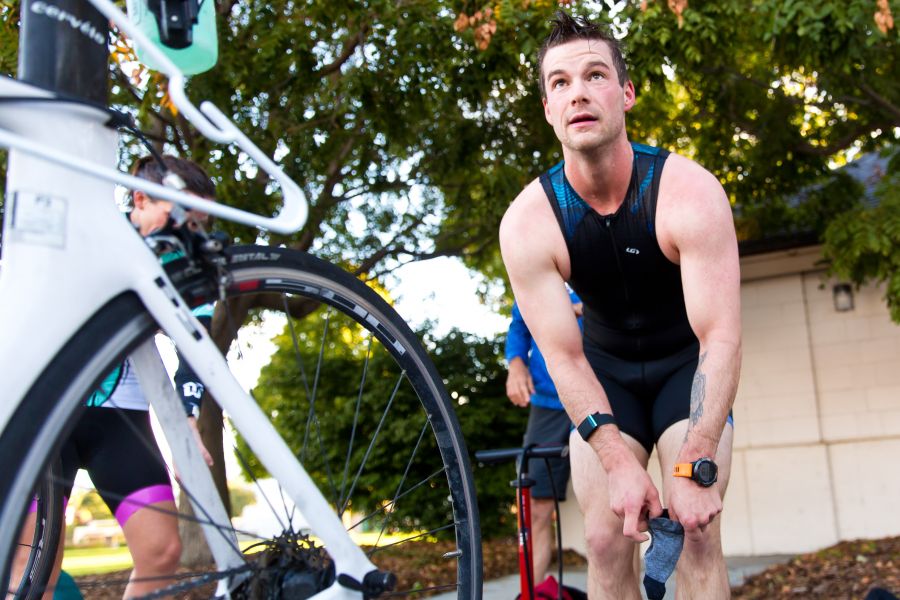 So Saturday morning, the day before the 2021 event would have occurred, a group of them got together pre-dawn at Okanagan Lake Beach. It was chilly and it was dark, but dammit, it was triathlon time. DIY triathlon time. With bagpipes. 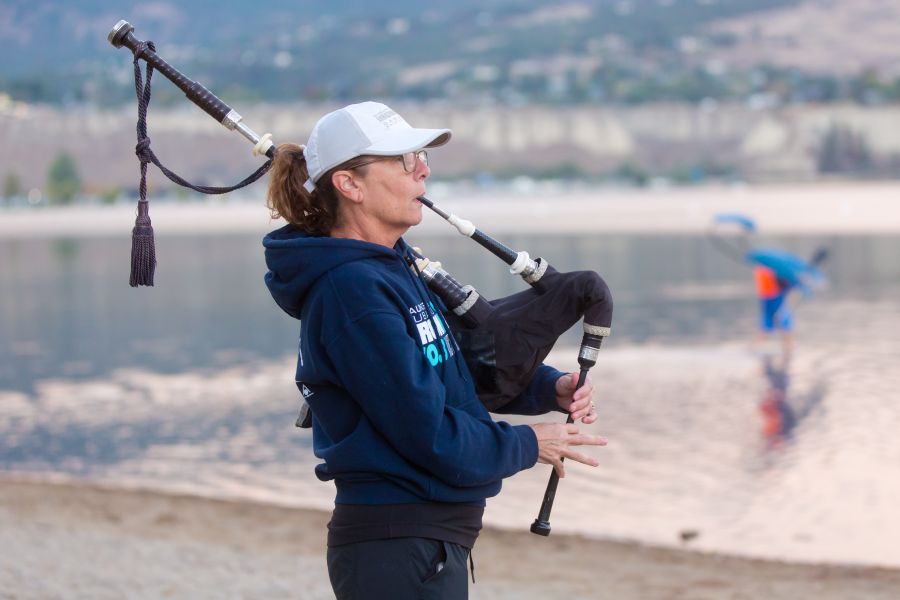 For local guys like Dave Matheson, a Pentictonite with a long and glorious endurance sport history and the very first person to sign up for the event when it was announced in July of 2019 at Rotary Park, the decision to do a self-made Ironman this weekend was made some time ago.

“I love doing Ironman and I’ve been waiting two years to do this race,” he said Saturday morning minutes before swimming 3.8K in Okanagan Lake (effectively two returns trips from the Peach to the SS Sicamous). 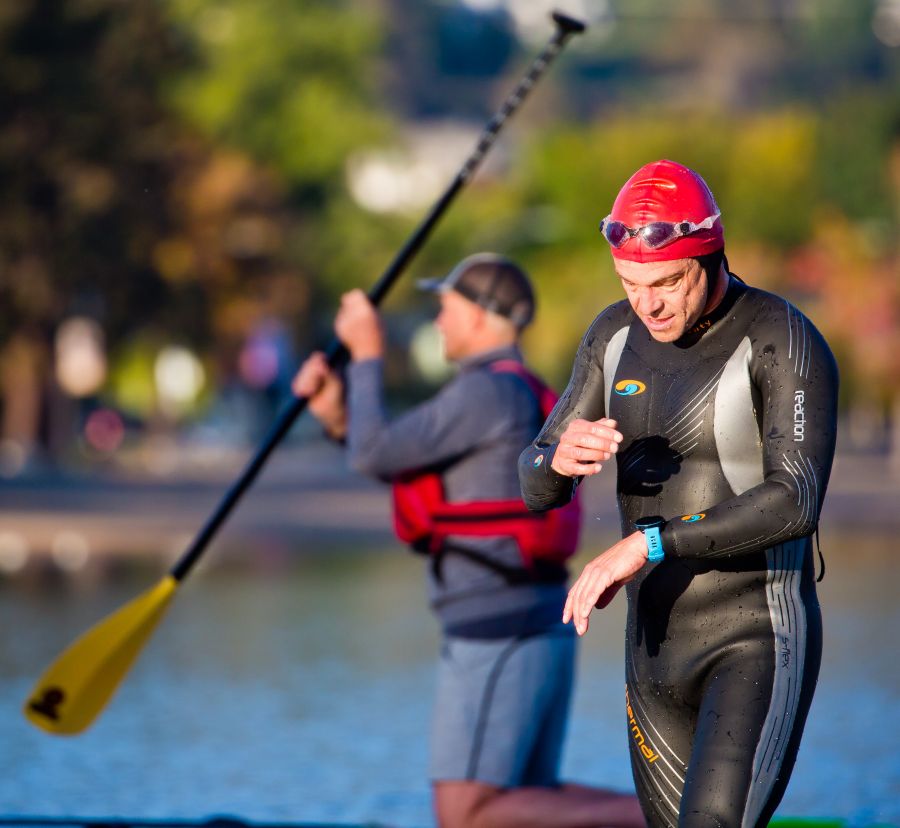 “I’d planned even if it was canceled that I was going to do it. But it just made it that much easier when Kevin decided to organize this and have his athletes do it. It just makes it easier when there’s other people out there too.”

The “Kevin” Matheson mentioned is noted local triathlon coach Kevin Cutjar, the fellow most responsible for this weekend’s makeshift event. 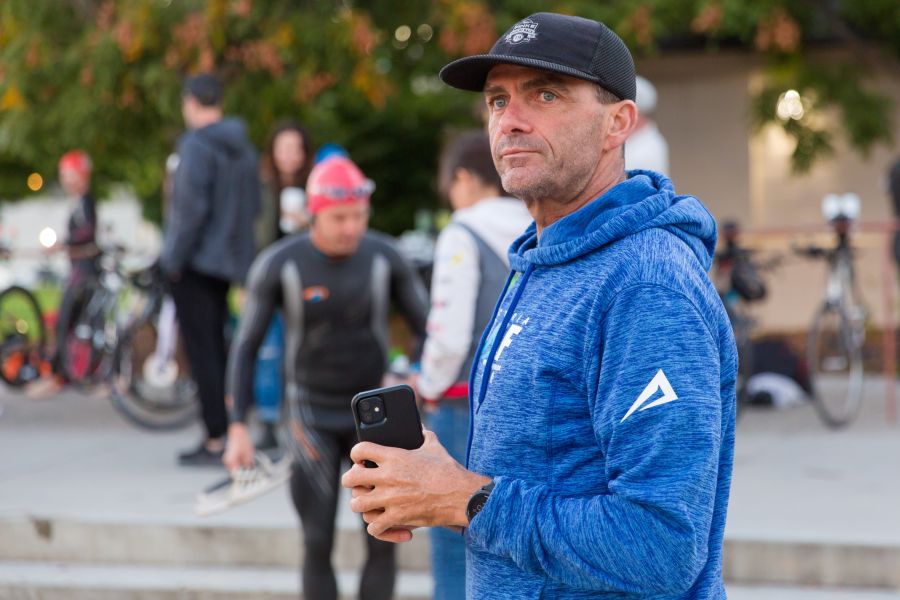 “With the Ironman being canceled,” he said Saturday morning, “we thought we’d give the option of people coming in to do a training day at the Ironman distance.

“Today we have swimming, biking and running. We’re giving support and we’re setting up aid stations, and we have family members to assist with some of the stations and offer extra support.”

Cutjar estimated 20 or so athletes ultimately joined in the fun, a number that grew to 30-plus with volunteers. 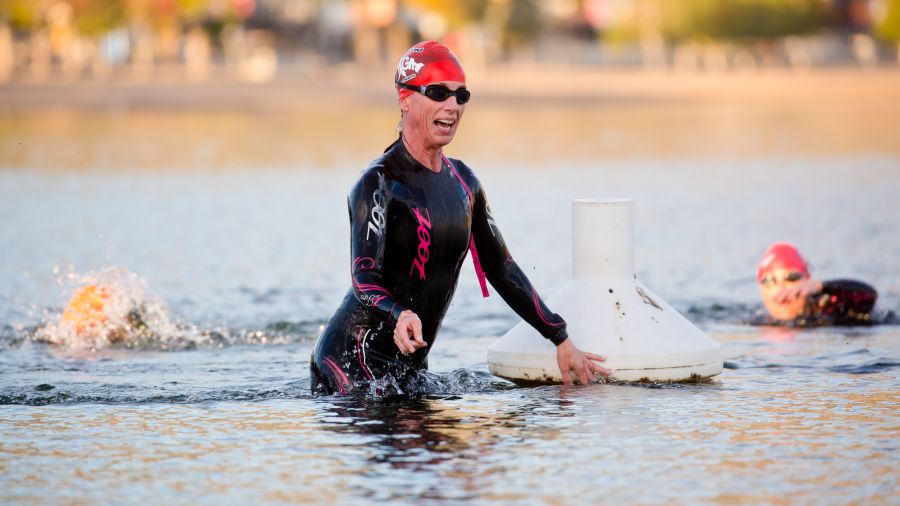 “The current interior health restrictions are at 100 people, so that’s put an end to most events. But we’re okay here.”

The relaxed format gave athletes choices. In the swim, for example, they could go the full distance, half distance, or skip it entirely — not a bad idea considering how far water temps have dropped recently.

“This being a training day, they can do what they want,” said Cutjar. 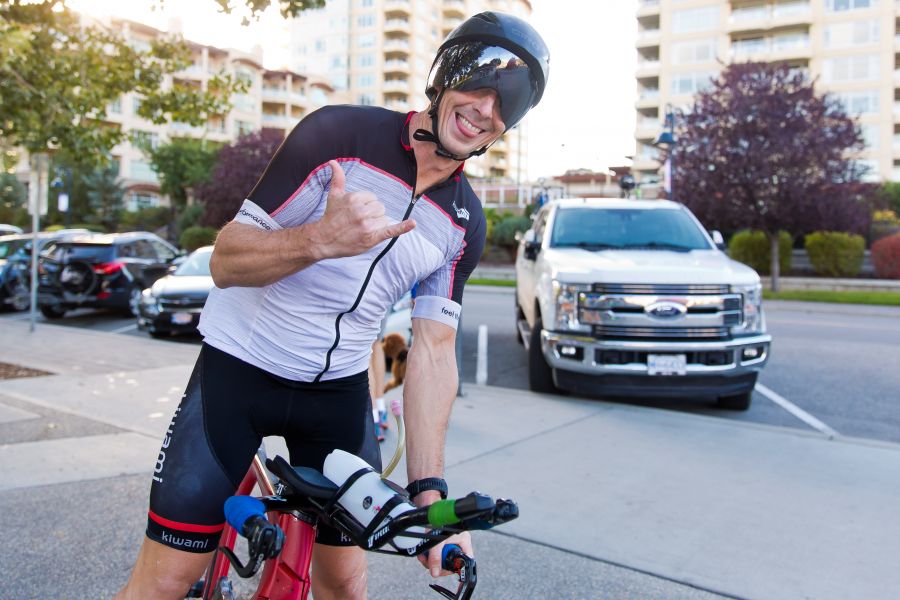 That philosophy extended into all the disciplines. Indeed, some participants opted to partake in the marathon portion (42.2 kilometers on a route involving both the KVR and Penticton River Channel trails) today.

Undoubtedly rivaling Matheson for top time of the day was Martin Caron, a dude who regularly hits the podium in endurance events across the continent. 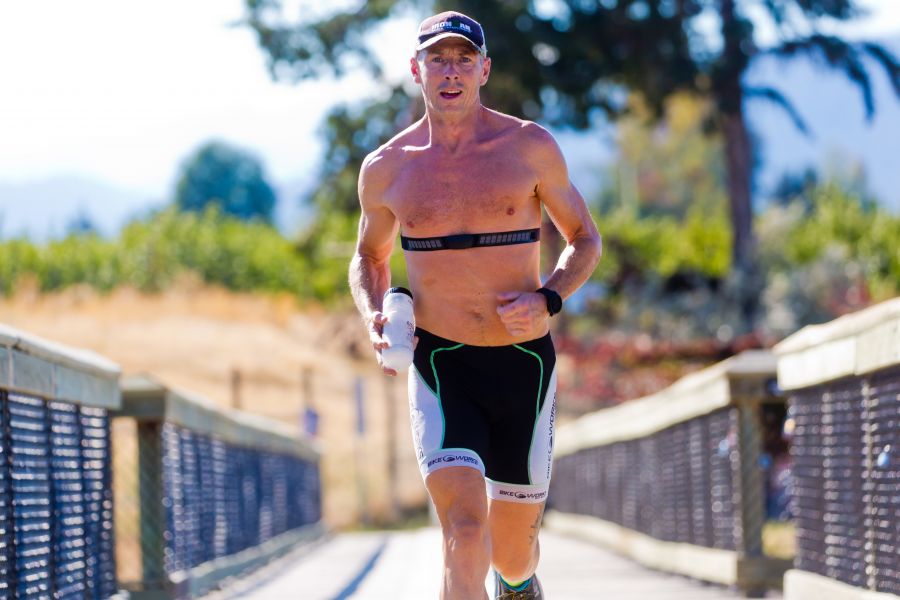 “I’ve been training for two years trying to get an Ironman in, but they’re always canceled,” said Caron when we flagged him down mid-event. “I was really hoping to have one here because it’s now my home.

“I was going to give my mom a reason to visit.”

The former construction worker said his obsession with triathlons began when “I came to Penticton to watch the last Ironman held here (in 2012), and somebody signed me up as I was driving back home. 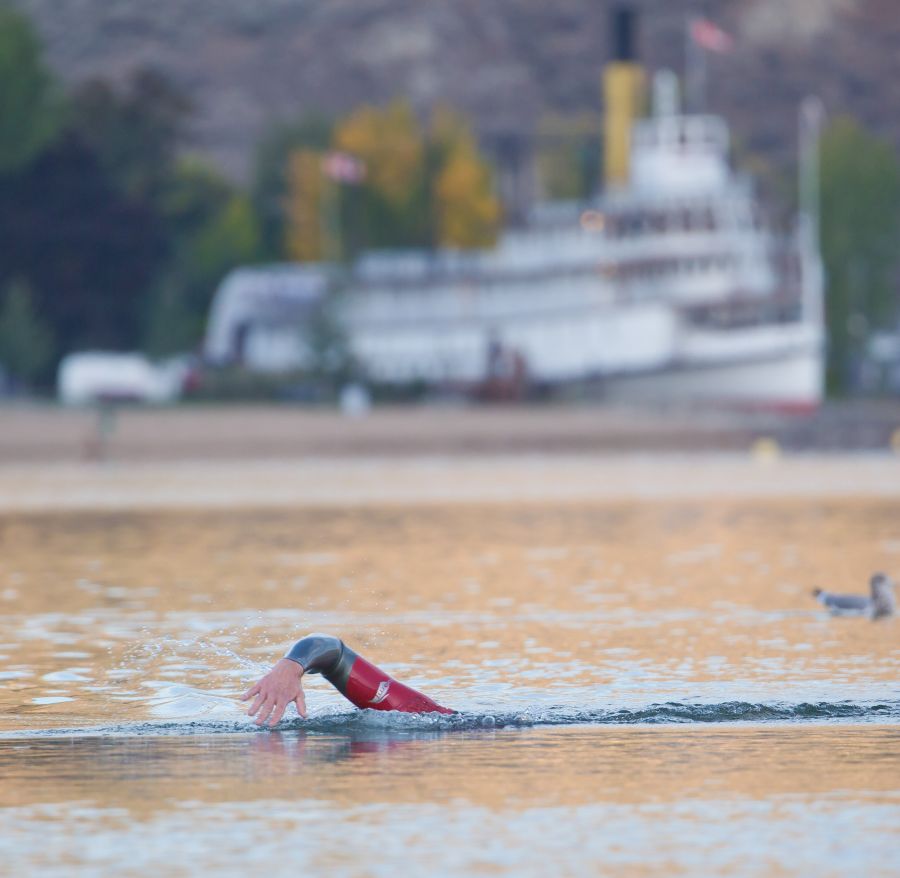 “So then I had to take swimming lessons. And I couldn’t run 5k to save my life. I’ve worked on it a bit since then.”

Unlike most everyone else we chatted with Saturday, Caron isn’t planning to participate in the 2022 Ironman Canada. Instead, he’ll enter the punishing three-day mega-triathlon (10K run, 420K bike, 84.4K run) known as Ultraman Canada, also held in and around Penticton. 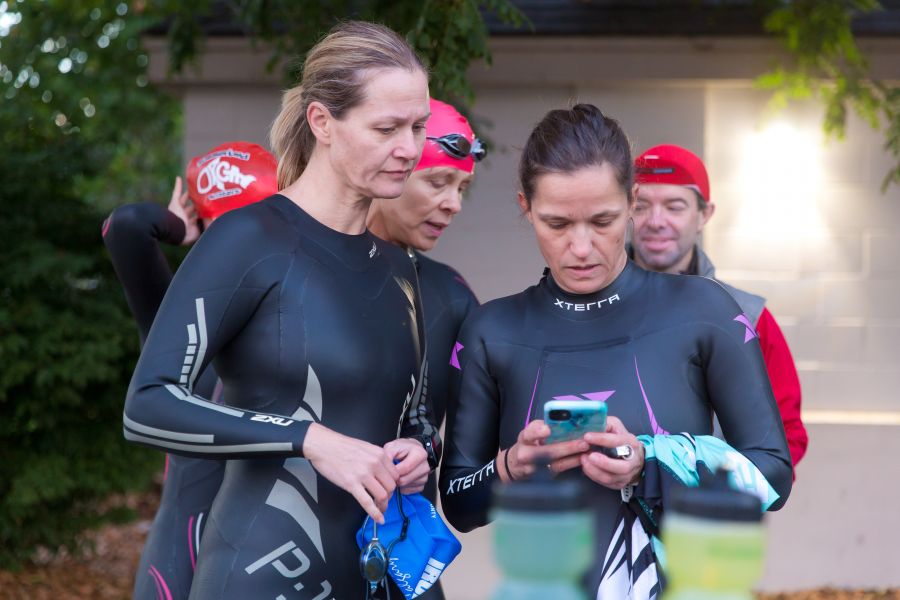 “The water today was beautiful,” he said with a smile. “A bit cold in the shallow area but warmer in the deeper spots. And it was very calm. It was perfect.” 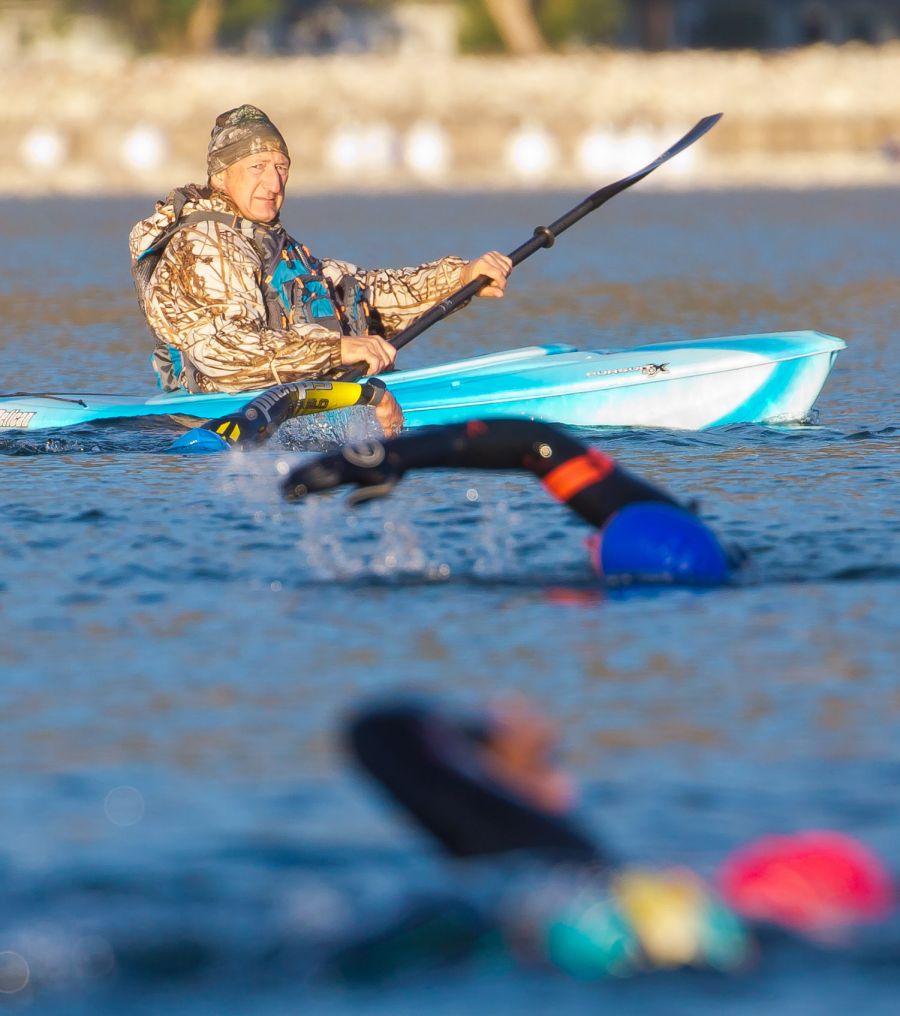 “I’ve wanted to try an Ironman all my life,” she said. “I’ve been watching my dad do it for years.

“So I signed up for 2002, and it’s now been two years in the making. I’m super disappointed it was canceled again. But we’re here today.” 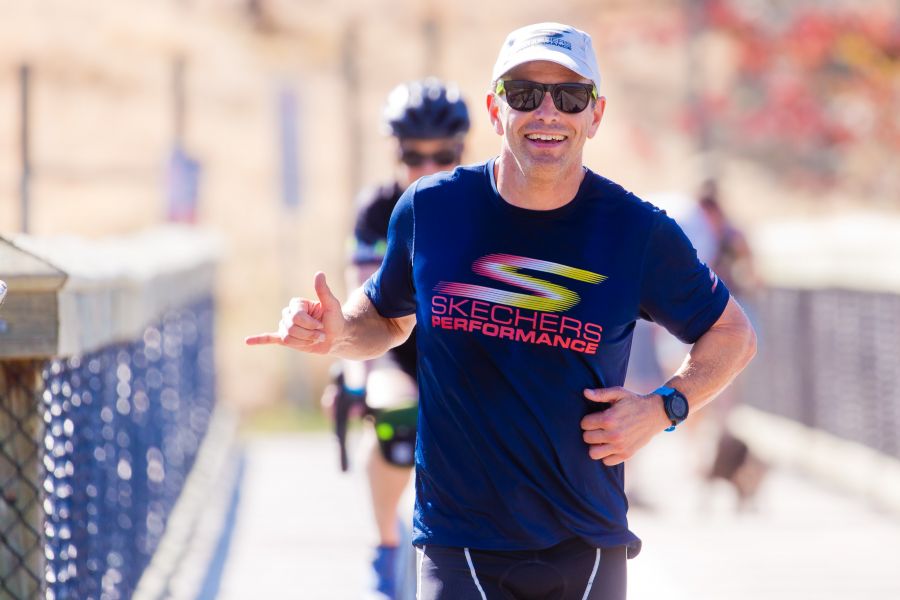 Like Hammerquist, “born and raised” Penticton resident and Ironman first-timer Chris Austen signed up for the 2020 event, only to watch it move to August 2021 and then September 2021. When none of those came off as planned, he jumped at the DIY concept.

And then there was Trevor Garvey. An Australian native who moved with his family to Vancouver on a temporary basis then opted to zip up to Penticton for this weekend’s endurance action, Garvey was all smiles before hitting the water Saturday morning. 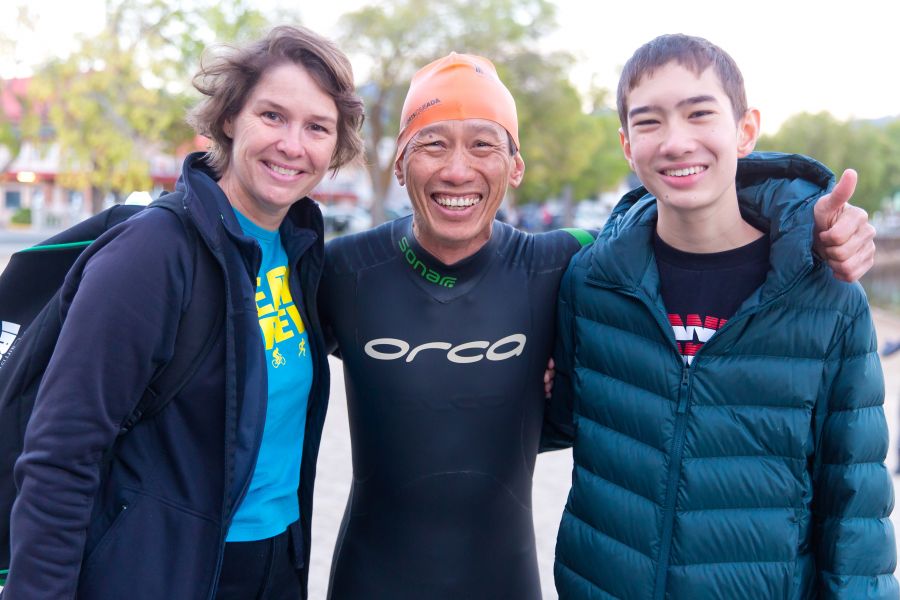 His family was too. They said they loved Penticton, the region and the geography. It was just of the spin-off bonuses we’ll see when the real Ironman Canada finally — finally — gets underway, hopefully next year.

Support local journalism by clicking here to make a one-time contribution or by subscribing for a small monthly fee. We appreciate your consideration and any contribution you can provide.