By Nigel Colborn for the Daily Mail

Many of us will be raking up leaves over the coming weeks. For most they’re just a nuisance. But to thrifty gardeners, they’re multi-purpose raw materials.

When converted to leafmould, they become useful as soil conditioners, mulches and ingredients for making potting compost. Fallen leaves and leafmould can also provide winter protection for tender plants.

To make leafmould, gather up fallen leaves and pile them in an enclosed space. A compost bay would work, as would a small, enclosed area bordered with wire netting.

Leaves will decompose quickly if gathered and piled up while wet. If they’re dry, soak them with water as you build your pile. 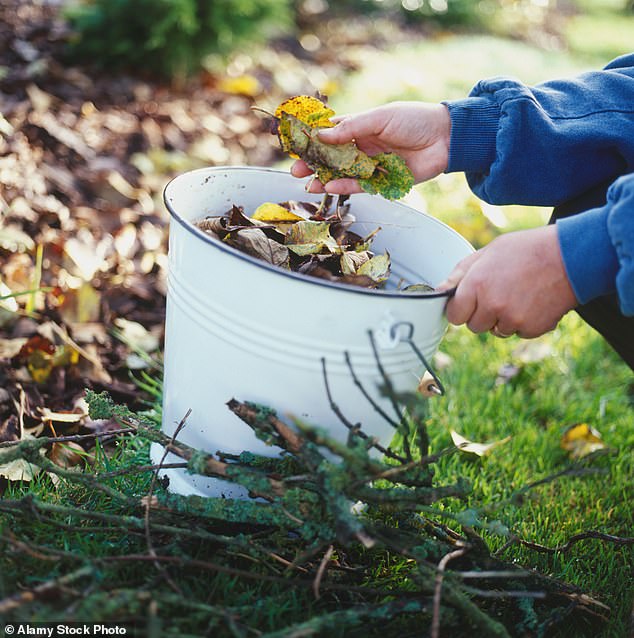 To hasten decomposition, scatter fertiliser over the leaves each time you top up the heap. The fertiliser will not be wasted. The minerals it contains will remain with the decomposed leaves.

Sometimes the rotting process can be slow to start. I find that a shovel or two of ordinary garden soil brings the right microbes. So, scatter that over your heap, too.

Potting compost containing leafmould can be especially good for potted Alpine plants such as gentians and small primulas. If you have outdoor troughs or sinks planted with Alpines, a leafmould dressing will keep that growing medium in good condition.

HOUSEPLANTS AT RISK OUTSIDE

Robust houseplants, such as South African Clivias and tender succulents, may have spent their summer on your patio. But overnight frosts become increasingly likely, so bring those into safety.

If you planned to re-pot any, or to divide them, this is a good time. Make sure the divisions are planted in containers large enough to allow for rapid growth. Always select your divisions from the outsides of the plants.

To keep rhubarb plants productive, they should be dug out and broken up every few years. The root-mass of each clump can be chopped out, broken up and composted. Good divisions will have one to three firm, pink or red dormant buds. Select the best for re-planting.

If you have any vacant ground, plant your new rhubarb there. Don’t gather newly planted rhubarb next spring, but let it mature for a bumper yield from March 2023.

PLANT OF THE WEEK: THE GUERNSEY LILY NERINE SARNIENSIS 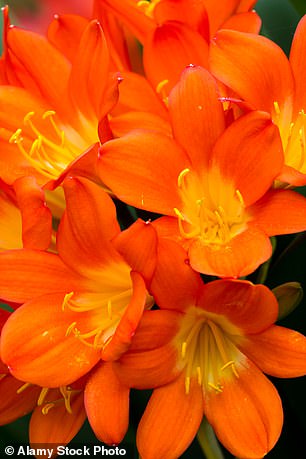 Native to South Africa, rather than the Channel Islands, this autumn-flowering bulb has carmine flowers with beautifully curled petals and prominent stamens. The bulbs are dormant all summer, producing naked flower stems in autumn. Strap-like leaves follow later. Though almost hardy, the plant is vulnerable below 5c. If you live in a mild area, they should survive if planted in sharp-draining soil, in a sunny, sheltered spot. Otherwise, grow them in large pots and keep them outside in sun for much of the year. Bring the pot into your conservatory from now until late April.

We’ve moved to a house with a tiny grass area outside. Wanting flower beds, I began to dig. But the soil is horribly sticky clay. Could it be improved? If so, how?

You can improve clay but it takes time. Remove the grass from your new beds as turf. Stack that and cover with black polythene. The grass will rot to create humus for adding back to the beds. Next, begin to work other organic matter or humus into the top layer of your clay. Sources of humus include garden compost, leaf-mould or potting compost.

Focus on the top few centimetres, working deeper over the coming years. Plant as soon as you can, with varieties which thrive in heavy soil.