The late-summer blooms may be fading in the gardens of Rymans, but the 15th-century manor house remains just as “delightful” as it was when the architectural historian Sir Nikolaus Pevsner saw it in the Sixties.

The grade I listed house in West Sussex sits in nearly 15 acres of gardens, which were laid out between 1910 and 1950 by the architect Claud Phillimore and have been much improved over the past 25 years by the present owner. The gardens have been open through the National Garden Scheme since 1997. 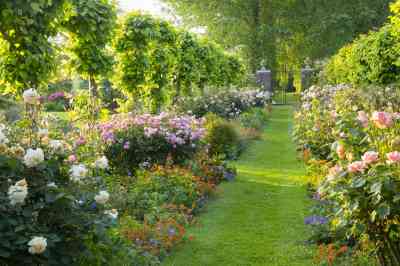 The gardens are open through the National Garden Scheme

There are brilliant tulips in April, a profusion of roses in June and spectacular end-of-season displays in September: swathes of sedums, crimson dahlias, late roses, sages and Japanese anemones.

The six-bedroom house is surrounded by a